Give-way to the Crazies 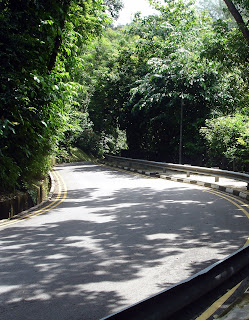 I have always been an aggressive driver. I have been driving since I could see over the steering wheel on back country roads and across fields.  Even in new cities and roads that I have never seen, I don't remember ever feeling completely lost or nervous.

I don't know what it is about driving in Asia that makes my heartbeat so rapidly while behind the wheel.  I feel completely vulnerable, lost, confused and completely exhausted by the time I arrive somewhere from concentrating so hard.  It took me awhile to get back behind the wheel after my "checkpoint incident".  Slowly, I have been going further and further from home again.

I can't seem to pinpoint what it is that has me feeling all backwards ~ is it the actual driver's, mostly new to driving cars themselves, the narrow roads and parking spaces, the "wrong" side of the road, getting in the wrong side of the car, or trying to use the blinker and the windshield wipers blast on instead?

I figured it out one day, while I was trying to get home on a new road.  Typically, I try to follow a car, rather than be the first car at a stop light, but I can't always make that happen.  This particular day I had turned, where the navigation lady told me to turn, but the road looked like a ramp coming at me!  The lines on the road, were all white dashes, which to me, means it is a one-way road.

If it is a two-way road, there should be a yellow line down the center of the road, dividing the opposite directions, right?!  Yellow lines are apparently used for bus lanes around here, which completely confuses me!

The driver's here, don't like to pick a lane and go.  They like to drive half and half. Half in one lane and half in the lane next to it, so that if they have to get over for a turning car, they can and they don't have to stop.  The cab driver's are the worst!

I have found that the cabby's like to play chicken on the roads, especially the narrow roads.  Most of the roads have a huge curb right at the edge, which leaves no room to give a little and the lanes are narrow.  The cab driver's like to come right at me, hoping that I will stop and let them by.  I've had enough of the give-way for the little man, with big-man syndrome pushing me off the road.

Today, I went for it.  Didn't stop when he was coming full speed ahead over the speed bump and he brushed my mirror!  He didn't even look back.  He actually touched my moving car with his and continued on as if I was completely invisible!  You Jerk ~ I have children in the car!  Okay....well, now I know what will happen if I don't give way.  Maybe, I will just give-way from now on...
Posted by 40 Little Toes at 4:33 PM