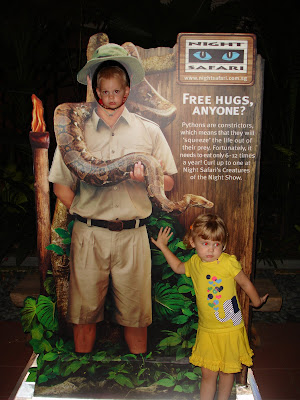 The zoo at night gives a completely different perspective!  A little creepier than walking through a Halloween haunted trail, but we all really enjoyed the late night.  Next time, I will bring a flashlight and maybe put a glowstick around the kids necks.  It is really dark, quiet and there are some free roaming animals, that can take you by surprise.  Fruit is hanging throughout the park in trees, to attract many varieties of very large (Flying Fox) and some small, bats.  They came extremely close to our heads, unexpectedly, and made us duck for cover many times.  At one point, we were exploring the cave trail and Kevin decided to take Makayla through a short detour off the trail.  Called me back to take their picture, in the cave background, and all I could see were bats swarming his head!  He looked up, said a few curse words, while trying to run out of the bat nest and said he noticed some fruit hanging around, but didn't think anything of it ~ next time he will!
The Night Safari has walking trails, abou﻿t a 45-minute tram ride and a couple different animal shows.  We missed the shows, because the kids were just too tired to continue, but we will hit them first next time!  The animals, are really active at night.  Roaming Tapirs, different types of deer, Fishing Cats and different Leopards, Tigers and Lions peering out from the trees...kinda creepy!  Even the elephants and giraffe's were moving around.
Riley's favorite animal of the night, the Tiger! Makayla, still stuck on the elephant, but became very upset with us, when we wouldn't pay $10 for her to touch the Boa Constrictor.  Last time she was close to a big snake, she freaked out and ran away. 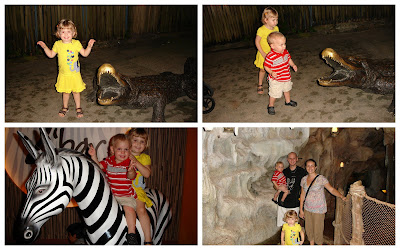 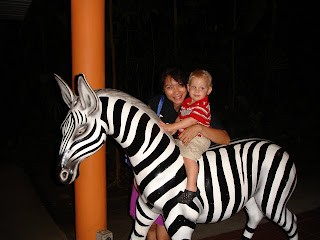