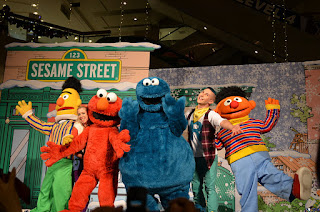 Sesame Street Live on stage at Plaza Singapura until Christmas.
Little Miss M singing along, dancing and Riley trying to keep up doing the Hustle was the best part of the show for me.  It's a short show, but they kept the kids engaged the entire time counting, singing, typical Sesame Street style practicing their alphabets and dancing.
Don't get me wrong! It's a wonderful show, I just really enjoy seeing the excitement on my own children's faces and seeing them having fun, more than anything in the world.  They would love to go back for every show, which is twice a day and three times a day on the weekends...I'll keep that part a secret from them for now and replay the video a couple times instead.
This was actually our second attempt at catching the show.  The first, was a couple weeks ago, when a new friend, kindly showed me that the Plaza is actually just a short walk from our apartment and brought us to the show.  We were a bit late, so we missed the first half.  This time around, we learned from our mistakes and arrived early to get a seat :-)
Posted by 40 Little Toes at 1:20 PM