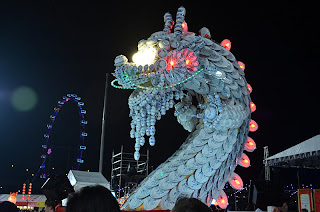 Celebrating the Year of the Rabbit 2011 and welecoming the Year of the Dragon 2012 ~ the Chinese Lunar New Year is the most important of the traditional Chinese holidays and has shut down areas of the city and most retail stores for 3 days.  Other stores and restaurants have shorter hours, yet others, are making the most of it and extending their hours.

The celebrations, also known as Spring Festival, will last 15-days here in Singapore, with the actual Chingay Lantern parade 2-weeks away.  The 15th day of the New Year is known as The Festival of Lanterns and marks the end of the Chinese New Year celebrations.

If you missed the first late-night dragon dance, no worries, there will be another one tomorrow at dark.  This was great news for Little Miss M who is completely obsessed with the light-up dragons right now, never seeing enough of them or the dancing lion. 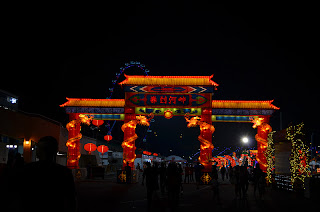 We didn't make it until the midnight fireworks, but when the downpour started right after arriving home, we were relieved we didn't attempt it.  I was surprised that the fireworks went on and we could still see a few over the buildings from our window. 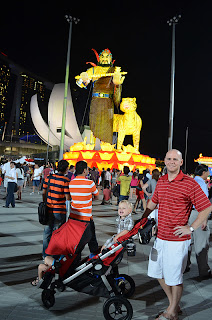 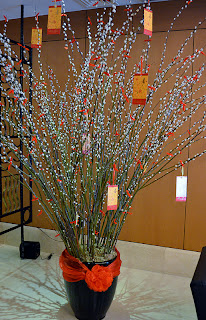 Red envelopes (Hong Bao in Mandarin) stuffed with money are given to children. We overheard one 8-year old say hers had $100 in it ~ wow! The color red denotes good luck/fortune and happiness/abundance in the Chinese Culture.

Chinese New Year celebrations were born out of fear and myth. Legend spoke of the wild beast Nien (which also is the word for "year") that appeared at the end of each year, attacking and killing villagers. Loud noises and bright lights were used to scare the beast away, and the Chinese New Year celebrations were born. Today, the 15-day New Year festivities are celebrated with a week of vacation in metropolitan areas of China. (History.com)

It is also tradition to completely clean-out the inside of your home, sweeping out bad-fortune and making room for the good luck.  Some people use this time of the year to completely refurnish their homes - every year - and start fresh on a completely new wardrobe! Jealous? I am! 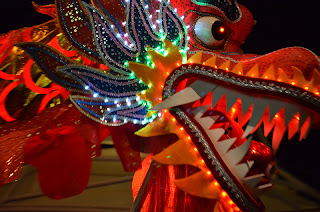 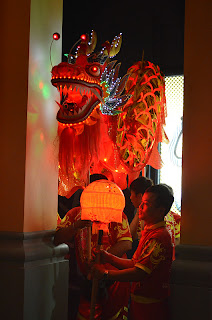 these festivals are so special... all the decorations and lights are overwhelming