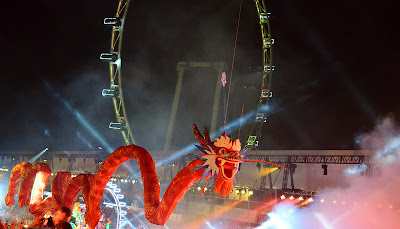 88-meter long Prosperity Flying Dragon and the Phoenix floated/danced through to start the parade (Singapore Flyer and the Formula 1 stadium in the background). 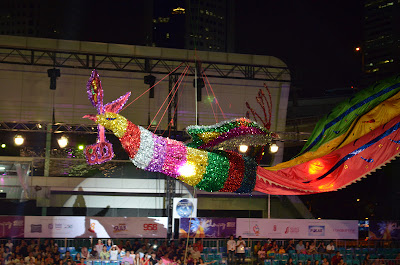 I have never experienced a parade on the water! Leave it to Singapore to come up with such a brilliant idea for their 40th Anniversary of  The Chingay Parade 2012 for the Chinese New Year and it was spectacular!


The word Chingay is from the Hokkien dialect, of which the Mandarin equivalent is Zhuang Yi (??), meaning "the art of masquerade". The festival began as a neighbourhood parade with only Chinese elements in 1973. Today, the Chingay Parade has evolved to be the grandest street and floats parade in Asia, showcasing the rich, vibrant multi-culturalism of Singapore and exciting cultures all over the world. To all Singaporeans, the next Chingay Parade is a parade of our people, our dreams and our pride! (Chingay website).

The parade wasn't actually in the bay, it went down a man-made waterway with ankle deep water flowing through.  The lights and fire flames reflected from the ground, as well as sparkling from the object itself.  9,000 volunteers took part in the parade, dancing, singing, playing drums - Performing their culture to the audience. 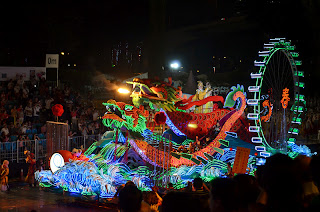 Sorry about the videos.  I accidentally deleted most, thinking they were terrible still-shots and this is what is left. 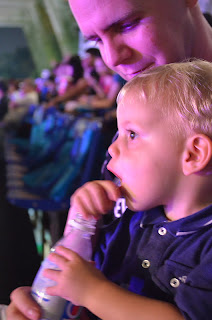 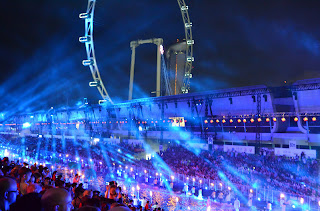 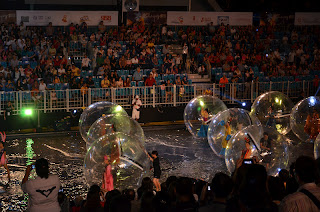 The passion the people have for this parade was felt through all of the fabulous performances from so many cultures around the world.  Everyone had to have put all their energy and imaginations into these displays for this spectacular show for months. They were all so different.

The music, the lights, the dance, costumes and the energy that came from everyone at the parade was inspiring and just so....excited and happy! 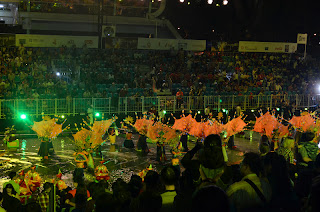 The close of the Chinese New Year 2012 celebration ~ Year of the Dragon ~ leaves us smiling and hopeful, that we will keep that smile and positive energy for the rest of the year. 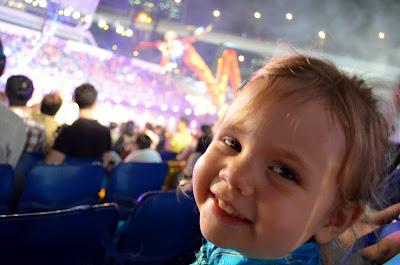